The Haven Project is prompted by a sense of academic responsibility to respond constructively and collaboratively to the increasingly precarious geographies evident in our current moment of global geopolitics and its seemingly endless cycles of violent interventionism. It would never have been possible without the financial and intellectual support from the project’s funder, the Irish Research Council, who in partnership with Dóchas set out a research vision for ‘Engaging Civic Society for International Development’ when they launched their New Foundations Award Scheme last year. The goal was an inspiring one: “to harness the knowledge and expertise of both our researchers and NGOs” in addressing key global political, environmental and social issues and “ensuring impact outside the academic domain”. The Haven Project was fortunate enough to receive a New Foundations Award and our hope is that the project’s work offers an important contribution to realising the IRC’s vision. Haven has a firm eye on networking critical expertise in, and with, the public sphere, by seeking to disseminate informed critique on a pivotal global challenge: a more holistic, humanitarian approach to Western interventionism. This was the theme of a wonderful day’s talks and discussion at the Haven Project Symposium at the Moore Institute, NUI Galway, on October 29th. 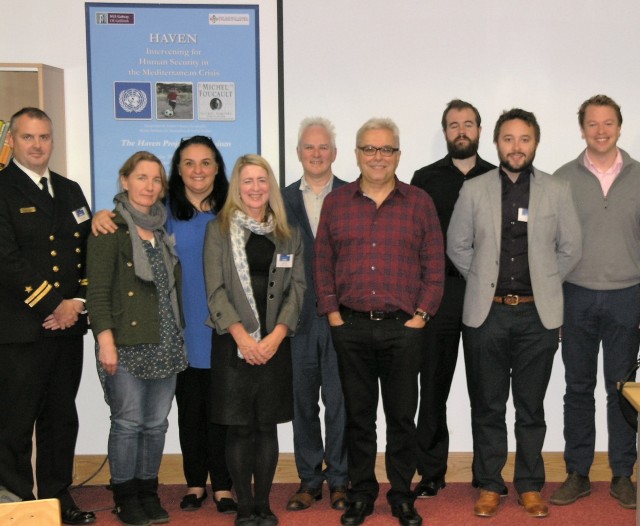 The symposium attracted over 100 delegates and coalesced a diversity of academic, governmental, non-governmental and activist voices and expertise. It involved leading academics, including the plenary speaker, Derek Gregory (University of British Columbia), who was joined by Claire Dorrity (University College Cork), Gerry Kearns (Maynooth University) and Alex Jeffrey (University of Cambridge). Their talks were complemented by brilliant presentations from Vicky Donnelly (GOWC), Annie Asgard (Edlumino School, La Liniere Refugee Camp), Lt Mike Brunicardi (Irish Naval Service), and NUI Galway students from the MA in ESD, whose ongoing research continues the project in vital ways. In addition, participants from Irish Aid, the Mary Robinson Foundation and more broadly concerned citizens and students from all over Ireland (MA and PhD students were present from 6 Irish universities) made the day a huge success (you can read more about the day’s events here and here). 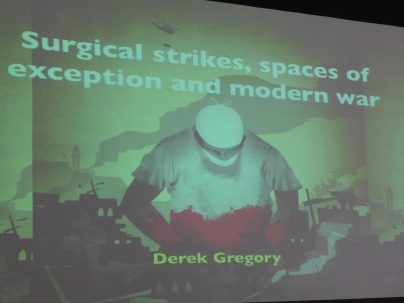 John has published widely in the areas of geopolitics, imperialism, security and development. His books include Negotiating Colonialism (2003), Spatial Justice and the Irish Crisis (2014), The Long War (2017) and Haven (2020). His research has been supported by various grants, from the British Academy, Clinton Institute for American Studies, ESRC and IRC, and in recent years he has held research fellowships at City University of New York, LUISS University Rome, Virginia Tech, the University of Cambridge and the University of Oxford. In addition to his research, John is passionately committed to teaching. At NUI Galway, he is the Programme Director of the MA in Environment, Society and Development, a leading Masters programme attracting international students from all over the world. The programme has won a number of accolades for its civic engagement element, which involves students working on the ground with the UN in Bosnia. John won the President's Award for Teaching Excellence at NUI Galway in 2011 and for a second time in 2018, and in 2012 won the NAIRTL Irish National Academy Award for Research and Teaching Excellence.
View all posts by Prof. John Morrissey →
This entry was posted in Uncategorized. Bookmark the permalink.